As part of their contribution to the National Strategy to fight against Imported Deforestation (NSID), ATIBT and LCB participated on Tuesday, October 13, 2020, in the Scientific and Technical Committee for Forests (STCF). 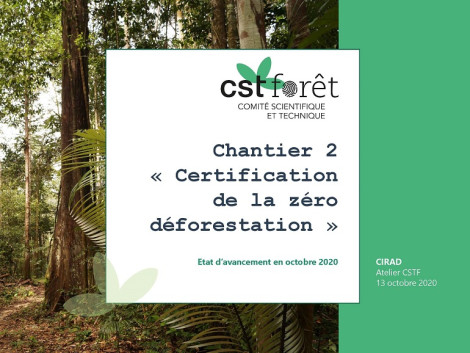 This committee, created in 2019 by the French Development Agency (FDA), is a space for mobilizing francophone expertise and has the mission to inform French public policies on the management and protection of tropical forests.

The meeting was organised by the FDA and GRET, an international development NGO under French law, which has been working since 1976 to provide sustainable and innovative responses to the challenges of poverty and inequality.

This recognized association of general interest, which also holds the status of a solidarity-based company, establishes alliances and builds partnerships in France and in all its countries of intervention, with actors from the associative, economic, public or research worlds. In 2019, GRET's 650 professionals implemented 203 projects, studies, and expertise in 28 countries, mainly in Africa and Southeast Asia.

Led by GRET, the STCF's ambition, from the outset of its activity, has been to eliminate deforestation associated with the import of agricultural commodities with an operation based on four entities:

- a committee of experts, the forum for dialogue where the Forest Committee's actions are debated, arbitrated, planned and evaluated;

There are about sixty members of the Forestry Committee, mainly from public, associative or private institutions, research and training, engineering and project management institutions, non-governmental organizations, professional organizations, and public or private players in the agricultural and forestry sectors, in France and abroad. With the exception of representatives of public authorities, they participate on a voluntary basis in the work of the committee in their own name, in order to maintain the independence of speech necessary for the debate.

On the basis of a roadmap proposed by its steering committee, the Forest Committee adopted an 18-month program of activities centered on the operationalization of the National Strategy to fight against Imported Deforestation (NSID).

Adopted in November 2018 by the French Government as part of Axis 15 of the Climate Plan, the 35 measures of the NSID aim to put an end to the importation of forest or agricultural products contributing to deforestation.

Three interdependent projects related to the NSID are underway, led by members of the Forest Committee:

- Project 1: A study on definitions and tools for monitoring deforestation;

- Project 2: dedicated to the certification of the zero-deforestation objective at the scale of the sectors targeted by the NSID (palm oil, soybean, cocoa, wood, beef, rubber) and their supply basins;

- Project 3: An operational project to define the impacts of the implementation of the NSID in the management of the risks associated with soybean imports from Brazil.

The results of this work will feed into French positions at the European and international levels.

The October 13’s meeting focused on project 2 "Zero Deforestation Certification", with a study conducted by CIRAD which reported on its progress in three parts: a reminder of the stages of work, the presentation of questionnaires on certification standards and the first results of the project to create a meta-label.

A synthesis of the performances of the different certification standards for each of the six "commodities" was presented: RTRS and ProTerra for Soya; RSPO, MSPO, ISPO, ISCC-EU for palm oil; RA 2020, Fair Trade 2019, ISO 34101 for Cocoa; Regulation for European export, Rainforest Alliance, Rebanho Xingú for Beef; SNR-i; GPSNR, RSE Michelin for Hevea and finally FSC and PEFC for Wood.

Each of these standards has been analyzed and rated, based on the SNDI criteria: environmental, social and certification application criteria.

For Wood, it was observed that the FSC and PEFC certification standards globally comply with the requirements of the NSID.

However, for wood as well as for palm oil, soybean and cocoa commodities, it was proposed that work be undertaken to improve the compliance of the different standards with the requirements of the NSIS. Hevea and beef were excluded from the rest of the study because they were too far from these requirements.

To this end, anonymous online questionnaires will be sent out and interviews will be conducted with a minimum of 40 people with different profiles, for each of the commodities. The wood questionnaires will address the "identified limits" of the standards (as required by the NSID), their content and application. They will target individuals from FSC, PEFC and ISEAL, certification bodies/auditors, importers, exporters and academia.

The idea is to propose amendments to all of these standards so that they all fully comply with the requirements of the NSID.

If you are an importer of tropical wood and would like to participate in this study, please contact Alessandra NEGRI: a.negri@lecommercedubois.fr

In parallel, a reflection is being conducted to create a national certification system for agricultural products to guarantee that imported products have not contributed to deforestation. In this regard, 43 interviews were conducted to assess the strengths and weaknesses of the 4 strategies identified: creation of a new label based on the requirements of the NSID; creation of a "meta-label" based on existing ones; management of geographical risks by production zone (responsibility of intermediaries and private companies); territorial approach (based on initiatives from producer countries).

At the same time, the preferences of stakeholders (public authorities, researchers, NGOs, standards promoters, and private companies) should be identified in relation to the National Strategy for Industrial Development.

In conclusion, CIRAD discussed the prospects for the implementation of the NSID, given that perceptions are very heterogeneous, that there are many options for action and that the subject remains complex. Regarding the sub-work on the meta-label, political trade-offs remain to be made. The analysis of the options and perceptions around the operationalization of the NSID should be finalized by November 2020.

The 3rd ATIBT Think Tank will be held in videoconference format on November 2nd and 3rd, 2020
back to the list
ATIBT takes a new stand against the illegal timber trade