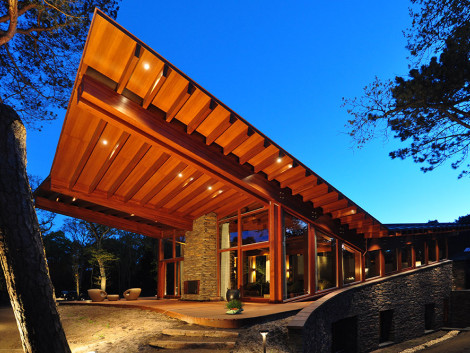 There was scepticism about developing value-added tropical timber production in Africa. However, companies in the field say they’re proving the doubters wrong. It’s still a work in progress, but further processing operations are establishing a solid base and the resulting products are demonstrating their technical credentials, cost and environmental benefits. Subsequently they’re being exported worldwide.

INTERHOLCO (IHC) started making FSC-certified finger-jointed laminated scantlings at its IFO facility in Ngombe in the Republic of Congo in 2012. Vice president sales and production Christophe Janssen acknowledges that initially it wasn’t an easy sell. “Established customers for logs and sawn timber from our production were conservative and didn’t want to take a risk with these new products,” he said. “People said you couldn’t do value added production in Africa, even though it was established elsewhere in the tropics, in Asia and South America. They assumed there would be glue and other problems with scantlings, and they’d cause machining difficulties. “It was a case of finding a different type of customer willing to try something new. Once we did that, we were then approached by our traditional customers interested in running trials, after which they placed orders!” 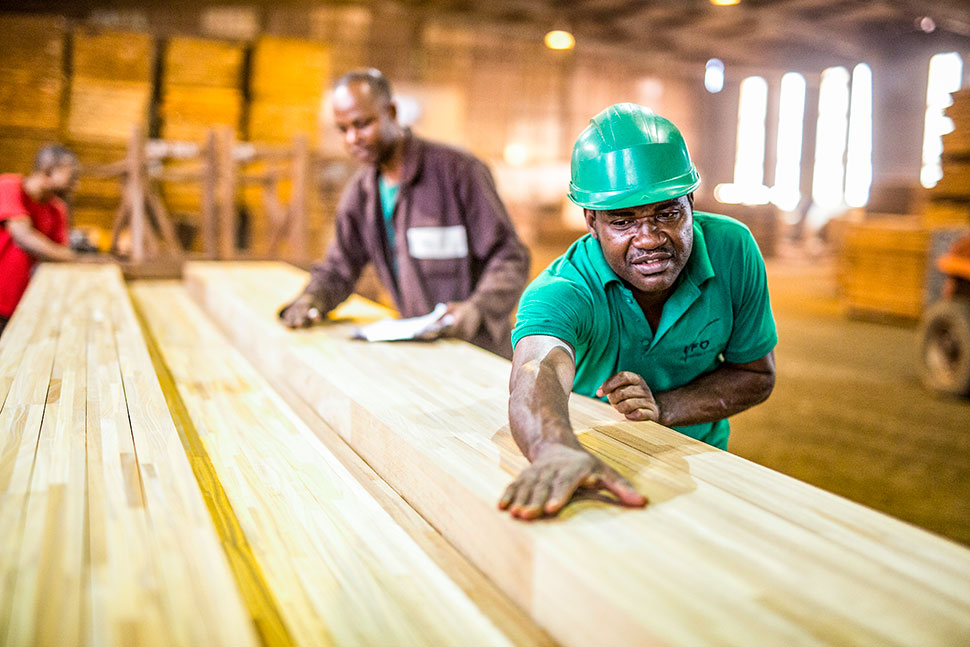 The key from the start was to focus on consistent quality and performance. “We began by investing in some of the best processing technology available, from Weinig, so we could be sure of uniformity, correct finger jointing pressures and so on. We’ve also continued to upgrade since, with a further major reequipment in 2016,” said Mr Janssen. “In addition, as we have our own forest concessions, we can guarantee all our raw material will come from the same source, that there’ll be no mixing. We have complete control of what’s going into the production process and combining this with tried and tested manufacturing methods, backed by regular quality audits, we’ve shown we can match anything on the market.”

IHC also focused training personnel in the manufacturing process and use of state-of-the-art, automated technology. “We put in place clear procedures and produced photographic how-to guides,” said Mr Janssen. “And our people are very enthusiastic. They were proud to be involved in what was quite a pioneering venture for Africa.”

The scantling plant now has annual capacity of 5,000 m3  and its products have been accredited to standard CTB-LCA 221 by  French timber technical institute FCBA. “To have this accreditation, alongside FSC certification is a definite marketing benefit,” said Mr Janssen. The scantlings themselves come in a range of variants in different species using four-side clear lamellas; KKK (three layers of finger jointed lamellas ), DKD (with solid outer layers and finger jointed mid-layer), plus on demand products with two, three or more layers.

INTERHOLCO’s market pitch for the products is that they provide stability, predictable yield and proven machining performance, and, of course, that the timber is 100% sourced from its FSC-certified forest concessions. And customers have attested to their benefits. “One Belgian window manufacturer couldn’t compete in plastic or aluminium with the big producers and was struggling with tropical hardwood lumber because they couldn’t accurately calculate yield or costs,” said Mr. Janssen. “That changed with our laminated scantlings. They cut waste and enabled the business to budget more effectively, as well as produce a window that could take on the man-made material competition in terms of consistent quality and performance.  They said it helped save the company.”

Sapele is the IHC factory’s main raw material, but it is also manufacturing in Kosipo and developing use of Tali, Bossé, Sipo, Limbali and Padouk, all FSC-certified. The company maintains that utilising this range of species contributes to sustainable use of the forest and also that the varieties it uses are cost competitive. “Padouk is more expensive, but there isn’t more than 10% price difference between the others,” said Mr Janssen.

IHC will look to introduce products in other species, but it’s not an overnight process. “From initial testing of the timber, through development of the right manufacturing approach to trialing with customers, it generally takes two years to bring a new species to market,” said Mr Janssen.

The company’s biggest scantlings market is France, followed by Germany and Belgium, and it’s starting to sell in Portugal and Spain. The UK and USA are proving slower to come around, but Mr Janssen believes it will happen. “They are perhaps more traditional markets, but we have sent trial bundles to both. It will just take time.”

There is now growing government commitment in a number of African countries to help their timber industries transition from being only primary material producers, to become further processing, value-added manufacturers. This was underlined at the September meeting of CEMAC, the Economic Community of Central Africa, where a proposal to ban log exports from the entire Congo Basin on January 1, 2022 was approved by ministers from the Republic of the Congo, the Democratic Republic of Congo, Central African Republic, Cameroon, Gabon and Chad. They also backed establishment of economic zones for primary, secondary and third-stage timber transformation and to set up the CRIB, the Regional Committee for Sustainable Industrial Development of the Timber Industry.

INTERHOLCO is upbeat about prospects for further developing its further processing business. “There are opportunities for more specialist items for particular industries,” said Mr Janssen. “That potentially includes laminated beams and other construction products. Softwood currently dominates this market, but with hardwood’s superior strength to weight, you could use less timber to do the same job and have smaller dimension products.” 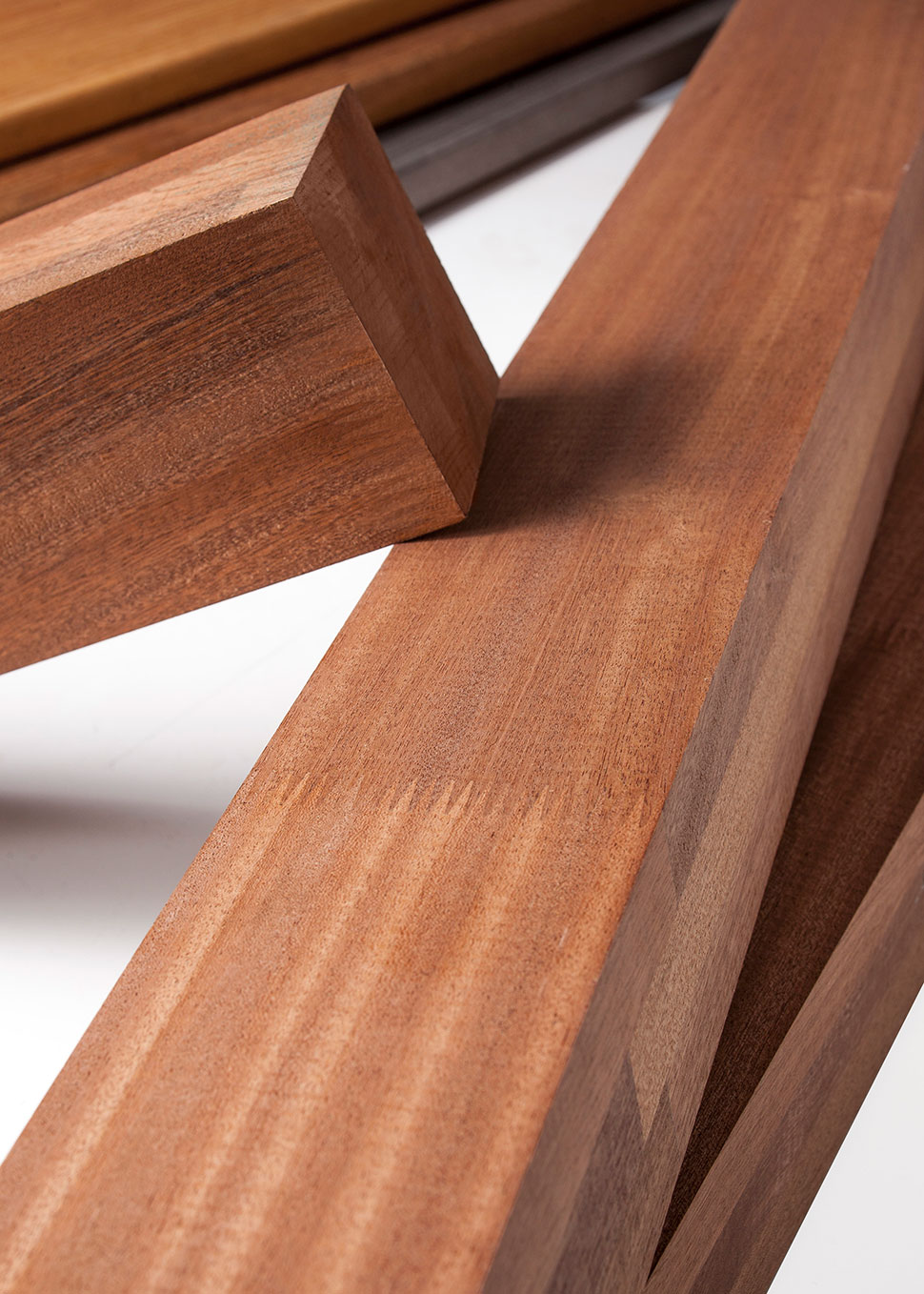