As reported on the website of Dezeen, architects can help fight climate change by choosing tropical timber, according to Timber Trade Federation CEO David Hopkins. 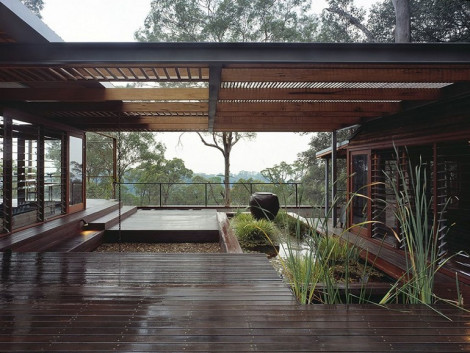 Speaking in a live Dezeen talk, Hopkins said that the Timber Trade Federation (TTF) wants to challenge negative associations surrounding tropical wood and promote it as "valuable feedstocks for the design world". By specifying responsibly-sourced tropical timber, architects and designers can help prevent unsustainable forest clearing. "That whole world [of tropical timber] has a very negative connotation with a lot of people," Hopkins said. "There's a lot of work going on within tropical forestry and tropical timber production that is incredibly positive," he explained. "We want to see these as very valuable materials and very valuable feedstocks for the design world."

Hopkins' comments were made in a live talk exploring the use of tropical timber in architecture and design. Moderated by Dezeen editor-in-chief Marcus Fairs, the talk was broadcast last week. Produced in association with the TTF, the talk aimed to raise awareness of a European Union initiative called the Forest Law Enforcement, Governance and Trade (FLEGT). Tropical countries that sign up to FLEGT get "a green light" to export timber products, making it easier for specifiers to identify responsibly sourced timber. Tropical timber is sourced from tropical forests in countries throughout Central and West Africa, Southeast Asia and South America. Yet wood from these areas has a negative connotation because people associate it with deforestation and illegal logging, Hopkins said.

Hopkins argued that by specifying timber from responsibly-managed forests, designers can help encourage more sustainable forestry practices. "When you are sourcing timber from areas with good governance, areas which have good management plans in place, then they are actively working against the illegal logging and actively working against the deforestation pressures which exist in those countries," Hopkins explained. "We think it is going to play a key role at the moment in the climate change battle," he stated.

The FLEGT initiative commits countries to Voluntary Partnership Agreement (VPAs), which are legally binding trade agreements. Signatories must implement regulations covering the timber supply chain and must guarantee that exported wood comes from compliant sources. Once a country signs up to FLEGT, its timber producers get a licence to export their products to the EU and the UK which, despite Brexit, is still aligned with the principles behind the initiative, according to Hopkins. "[FLEGT is] an action plan towards responsible forest management, responsible sourcing and harvesting of timber," Hopkins said. "When those countries have completed that transformation, if you like, of their public sector, to an approved degree, they get a green light, a green lane for trade with the EU and the UK," he explained. "So the FLEGT action plan rewards countries for transforming their forest landscapes, for managing them responsibly, and it rewards them with an open free-trade agreement."

FLEGT will be showcased at COP26

So far, Indonesia is the only country to have been given a FLEGT license. However, 15 others have signed a VPA agreement and are on their way to receiving the license. In Indonesia, the FLEGT license has helped increase the trade in the country and decreased its rate of deforestation, but also led to an improvement in the quality of its products, Hopkins said. To showcase the initiative and encourage other internationally recognised bodies to adopt it, TTF will present it at the 2021 United Nations Climate Change Conference (COP26), which takes place from November 1 to 12 in Glasgow. "A strong system of governance and legal framework covering forests for business and civil society to work within it is a key requisite for keeping forests well managed and safe," concluded Hopkins. "There is consensus around the need for these transformations within countries, but there needs to be an extra political push to get it working properly and fully recognised around the world. We hope to help provide this and will be increasing our campaigning later in the year."

Hopkins spoke to Dezeen from London's Building Centre, where the TTF is currently showing its Conversations about Climate Change exhibition. The exhibition is showcasing objects made with timber sourced from countries that are currently working towards being licensed via the FLEGT initiative. The aim is to provoke discourse on tropical woods in the lead up to the COP26 climate talks, and how their use can help alleviate global warming.

You can watch the live Dezeen talk here.

ATIBT technical data sheet : quality of plantation species for timber use
back to the list
ATIBT and the Malaysian Timber Council, common issues for the future of tropical timber