In the first four months of this year, the value of EU imports of tropical wood and wood furniture totalled USD 1.23 billion, a gain of 28% compared to the same period last year. We share with you information from the latest ITTO tropical timber market report (July 15 2022). 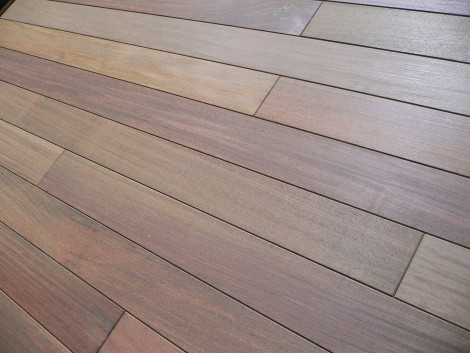 In terms of value, this was by far the highest level of trade for the four month period in the last five years (Chart 1). In fact trade value was at a level not seen since before the 2008-2009 financial crises. 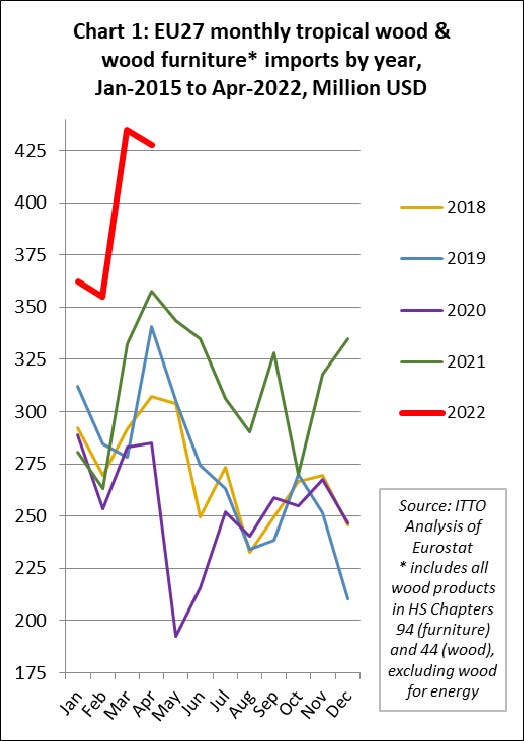 Part of the gain in EU27 tropical wood product import value in the first four months of this year reflected a rise in CIF prices, driven both by continuing high freight rates and severe shortages of wood and other materials due to
logistical challenges during the global pandemic.

In quantity terms, EU imports of tropical wood and wood furniture products in the first four months of this year were, at 669,000 tonnes, up 14% compared to the same period in 2021.

The curtailment of wood supplies from Russia and Belarus due to the sanctions imposed by the EU following the invasion of Ukraine in February is opening up new opportunities in the EU market for some tropical wood products, notably plywood and decking for which Russian birch and larch products have been important substitutes.
In the first four months of this year, tropical products accounted for 8.2% of the quantity of all wood and wood furniture products imported into the EU27, which compares to 6.9% during the same period in 2021. The gain in tropical wood share is due mainly to a 37% and 17% reduction in imports respectively from Russia and Belarus during this period.
However, larger beneficiaries of the opening supply gap so far this year have been Norway, China and Brazil (nontropical products only). 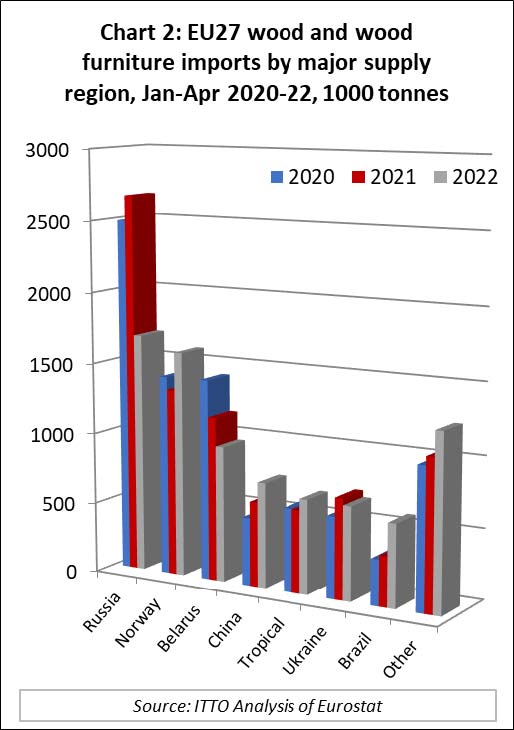 There were significant increases in the value of EU27 imports of most wood product groups from tropical countries in the first four months of this year. 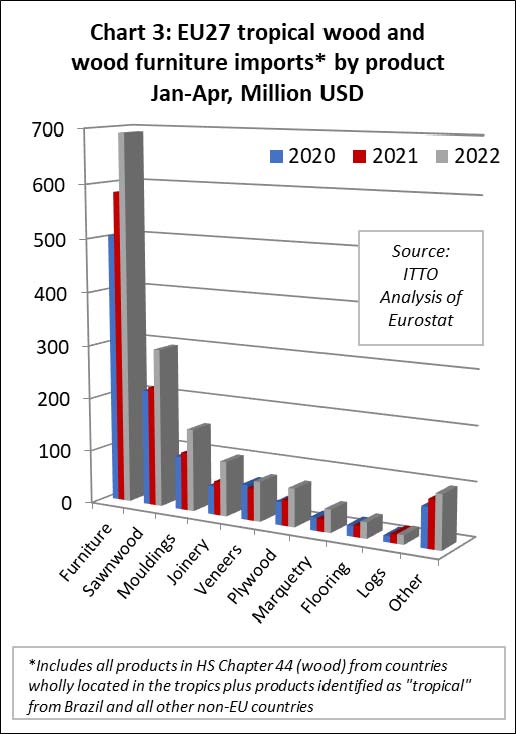 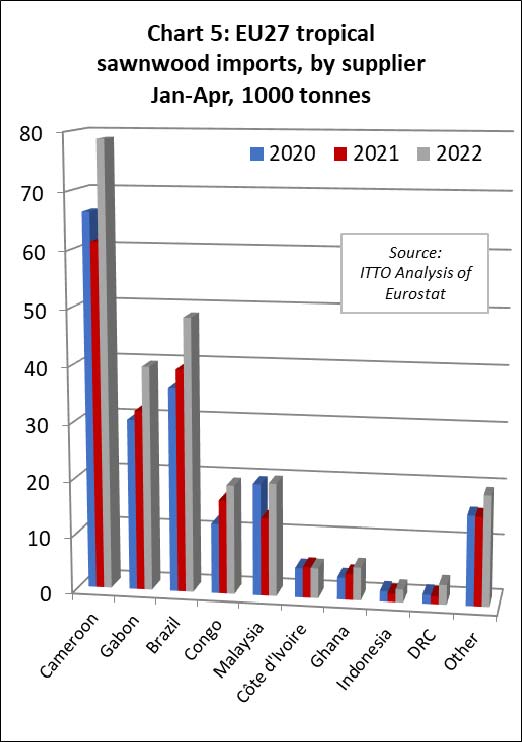 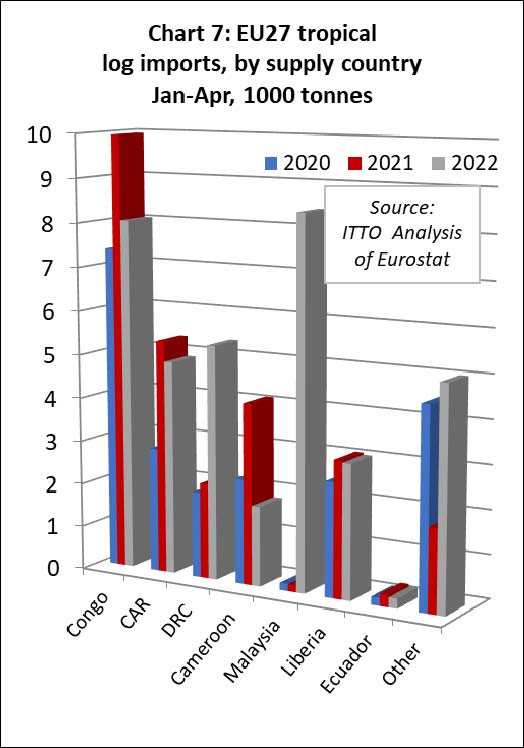 The rise coincides with a limited export program by the Malaysian State of Sabah allowing eligible parties to export unprocessed timber from natural forests which began on 3 January this year.

EU27 log imports from the largest African supply countries declined in the first four months of this year compared to the same period last year; imports were down 19% to 8,000 tonnes from Congo, down 9% from CAR to 4,900 tonnes, and down 56% from Cameroon to 1,800 tonnes.

However, imports from DRC increased 145% to 5,400 tonnes. Imports from Liberia were level at 3,100 tonnes during the four month period. 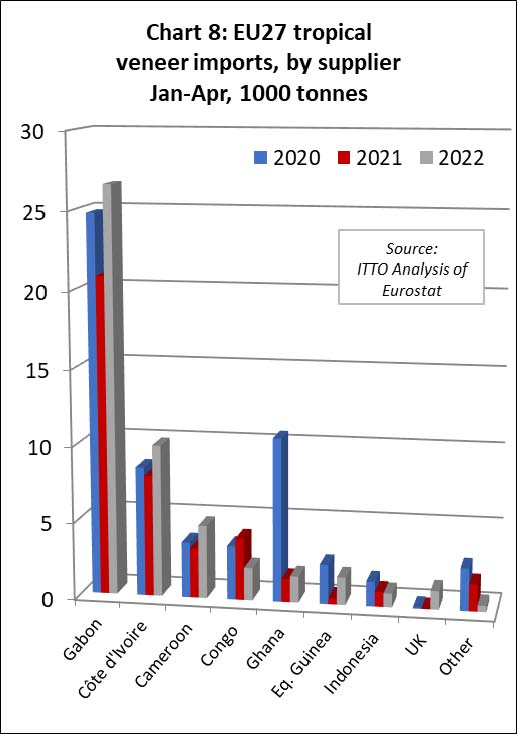 In the first four months of 2022, EU27 tropical plywood imports of 40,200 tonnes were 11% more than the same period the previous year. Imports from Indonesia, at 12,300 tonnes, were up 5% compared to the same period last year.
However, the biggest increase was in imports from Gabon, rising 84% to 9,500 tonnes. Imports of tropical plywood also increased 58% to 3,700 tonnes from Morocco. These gains offset a 42% decline in imports of tropical hardwood faced plywood from China to 4,700 tonnes. 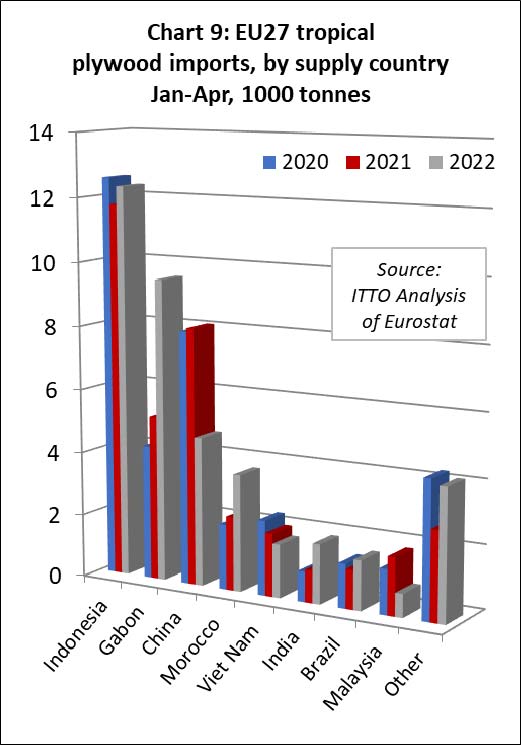