The 26th meeting of the Committee on Forestry (COFO 26) was, simply put, quite unlike any other: it took place a good two years and a half into a global pandemic, seven months into an ongoing conflict. COFO 26, held in Rome at the Food and Agriculture Organization (FAO) of the United Nations from 3 to 7 October 2022, took place in the middle of a triple crisis, triggered by climate change, biodiversity loss and pollution. In his opening speech, FAO Director General Qu Dongyu reminded participants that, overlapping that crisis are food, feed, fuel and fertiliser price increases. 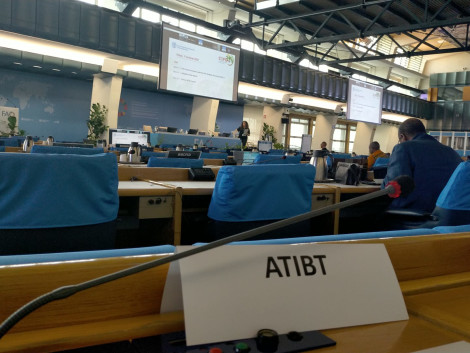 Meant as a platform for exchange and dialogue among participants, COFO is the occasion for FAO Members to provide suggestions for FAO’s work in forestry. Confronted with unprecedented challenges, this COFO meeting was substantially charged with 16 topics on top of the usual agenda items, to make up for time lost owing to COVID-19.

Debate was sometimes difficult. Conflicting interests caused the discussions to last until late, with many, long hours of negotiation, until compromise language was agreed by the main parties involved. On the one hand, this led to the COFO report no longer making reference to agriculture as main cause for deforestation, despite the State of the World’s Forests 2022 stating this explicitly. “Halting deforestation” was also purged from the final report. On the other hand, for the first time agriculture and forestry were being discussed as a joint agenda item, which is an important step to identify and scale-up win-win solutions for food security and nutrition that protect forests and trees. COFO 26 also provided evidence that, globally, trends are improving. Although the global deforestation rate is not reversed, it has slowed. Women, youth, local communities and Indigenous Peoples are high(er) on the international agenda, after years of neglect. It is no coincidence that Princess Basma Bint Ali of Jordan, FAO’s Goodwill Ambassador for Near East and North Africa, Cécile Ndjebet, Founder of the African Women’s Network for Community Management of Forests and the winner of the Wangari Maathai Forest Champions Award 2022, and Analí Bustos, World Forestry Congress Youth Forest Change-makers winner also spoke at the opening. Financial assistance to implement commitments on forests under the Paris Agreement was less controversial. Results-based payments (under REDD+ and other schemes) were also more welcome, given their acceptability to developed countries and companies looking to meet their own environmental goals or commitments by investing in such schemes.

Discussions showed how, seven years away from Agenda 2030 and attaining the United Nations Sustainable Development Goals, forests are part not just of the solution, but of global solutions - for resilient and sustainable economies, as well as for combating climate change. Two reports — The Global Forest Sector Outlook 2050: Assessing Future Demand and Sources of Timber for a Sustainable Economy and Mainstreaming Biodiversity in Forestry — were released during the 8th World Forest Week, held on the sides of COFO 26.

The reports, jointly carried out by FAO with ITTO and CIFOR, respectively, highlight how the ground work FAO Forestry Division carries out based on COFO’s recommendations really is key to attaining positive outcomes for forests, people and planet. And how agreement is vitally important, especially in times of crisis.

WFW2022 was structured around the priority areas outlined in the FAO Strategic Framework 2022-2031 with its vision of a sustainable and food secure world for all, in the context of the Agenda 2030 for Sustainable Development.

News from the markets
back to the list
FSC General Assembly : ATIBT is happy to announce that Motion 23 on Intact Forest Landscapes (IFL) passed