There’s a corner of a unique experimental housing development in the Netherlands that is a little piece of Guyana - a stunning showcase of the potential of its tropical hardwood. 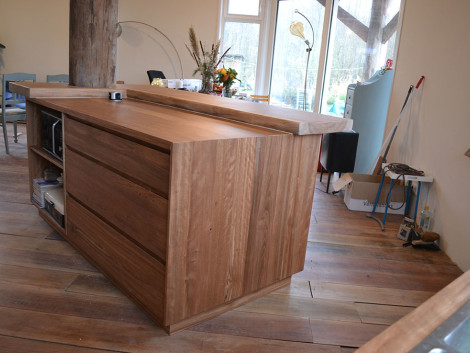 The development, Oosterwold Almere, is described as a ‘garden city’. It’s one of four that will eventually be built on farmland around the town of Almere, about 32 km from Amsterdam.

Guyana home in the Dutch polder

So far 1000 homes (and counting) have been built at Oosterwold and the planning freedom has resulted in a remarkable array of types, shapes and sizes of structure built in a broad mix of materials. One that particularly stands out, however, is the three-bedroom, three-storey home of Stanford Wilson, his wife Sandra Tielemans and their teenage daughter. 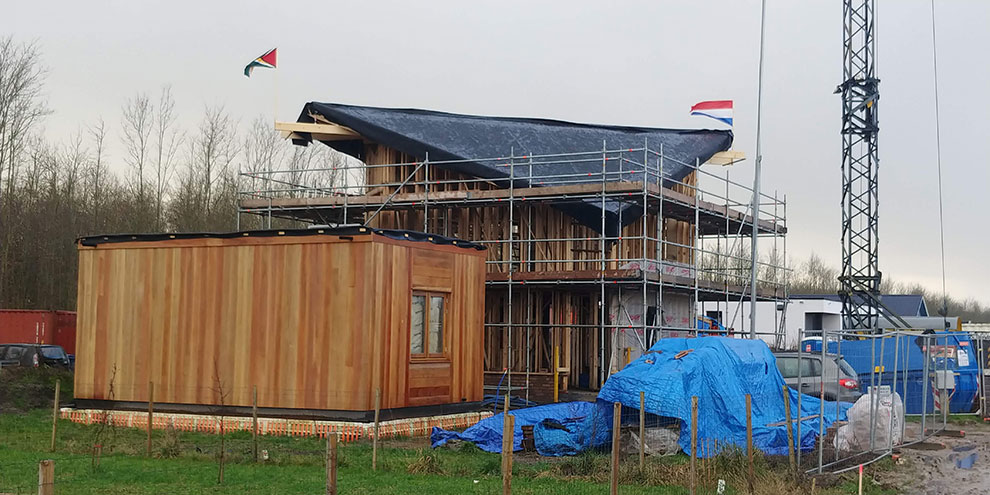 It’s partly the octagonal footprint that differentiates it from its neighbours; that combined with a first floor verandah supported by a massive section of tree trunk, a steep-pitched moss sedum roof, plus straw bale, clay and lime plaster walls, which are part finished in wood cladding. But what also sets the house apart is the array of Guyanese hardwoods it features. They’re used structurally, for cladding, for internal and external furnishings and joinery, not to mention a separate small barn which serves simultaneously as Wilson’s woodwork shed, man-cave and home brewery and Sandra’s creative studio! In total, inside and out there are 10 species.

Wilson is a flood risk advisor at the Dutch Ministry of Infrastructure and Water Management. So timber and more specifically tropical timber, used in marine civil engineering applications, figure prominently in his work. This partly fed his desire to use wood extensively in the new family home. But it goes deeper than that. Wilson is from Guyana, more specifically from Ituni, a village about 300 km from the capital Georgetown. He grew up in and around the forest and timber industry. “While teenagers in the Netherlands get jobs in supermarkets during summer vacations, I worked for loggers!” he said. “I went into the forest with tree spotters and learned about the available species and their properties.”

With this background, he went on to do a degree in tropical agriculture in Guyana, followed by a masters in natural resource  management from the University of Utrecht. But, after all this, it was Sandra’s idea to use Guyanese timber for their house. “We’d first met in Guyana when she was working there for Voluntary Services Overseas (VSO) and she said with this and my background, Guyanese timber would be the ideal building material!” said Wilson.

The couple then sat down with Gert-Jan de Jong of Arc2 Architects. “We explained we wanted to use timber extensively and to include some design features, like the Guyanese-style wood verandah, but after that we told Gert-Jan to let his creativity run free!” said Wilson. “So there were challenges for him, but he also found it exciting! Of course he was not familiar with most of the species we wanted. But he had a wealth of experience with tropical timber in bridge designs, and we worked together on what could be used where. We were also able to draw on existing calculations for tropical species with similar performance characteristics used in the Netherlands.”

It took a while to track down a supplier in Guyana who could provide all the species required, but finally one company said ‘yes to everything’.  “What is more, they were FSC certified, a strict condition for doing business,” said Wilson. “So far there is only one major FSC-certified concession, plus a few smaller concessions with shared FSC certification. The business which said they could provide every item we wanted was one of the latter. They were a real find!”

While on vacation in Guyana, Wilson visited his supplier and saw his timber arriving from the forest and emerging from the mill. His order filled two 40 ft containers. The core structural components of the house are two heavyweight Greenheart logs. One, at the centre of the house, is 8 m long, the other, which supports the verandah, 7 m. These were stripped of bark, but otherwise unprocessed. Getting a haulier to take them for kilning in the Netherlands, Wilson discovered just how heavy they were. The larger one weighed 1.5 tonnes, the smaller 1.2. Tied into the central log, the timber frames for the walls are in European pine, but everything else is tropical.

The heavy section staircase is in Purpleheart, which has also been used to make a dining tabletop, Shibidan and Kabukalli form the cladding, while the latter also features as flooring and some window sills. Others are in Suya, which Wilson’s carpenter also made into a tabletop for the bathroom. There are other tabletops in Tatabu and Silverballi, with the latter and Crabwood also used in bed frames. The stunning kitchen is made in rich red-brown Hubabali and for the mancave/studio and other garden structures Wilson chose Wallaba. All the timber was kiln-dried, but inside and out is left unfinished to age and weather naturally.

For the contractor and carpenters, working with most of these timbers was a learning curve, which slowed the pace of construction. But as they learned, they came up with suggestions on machining and using the timber. “And they were impressed with the results achieved,” said Wilson. “Lennat van Dueren den Hollande, the carpenter who built the kitchen, was quite hesitant when he saw the hububali. But when he finished he said ‘Stanford, that worked out really good’!” 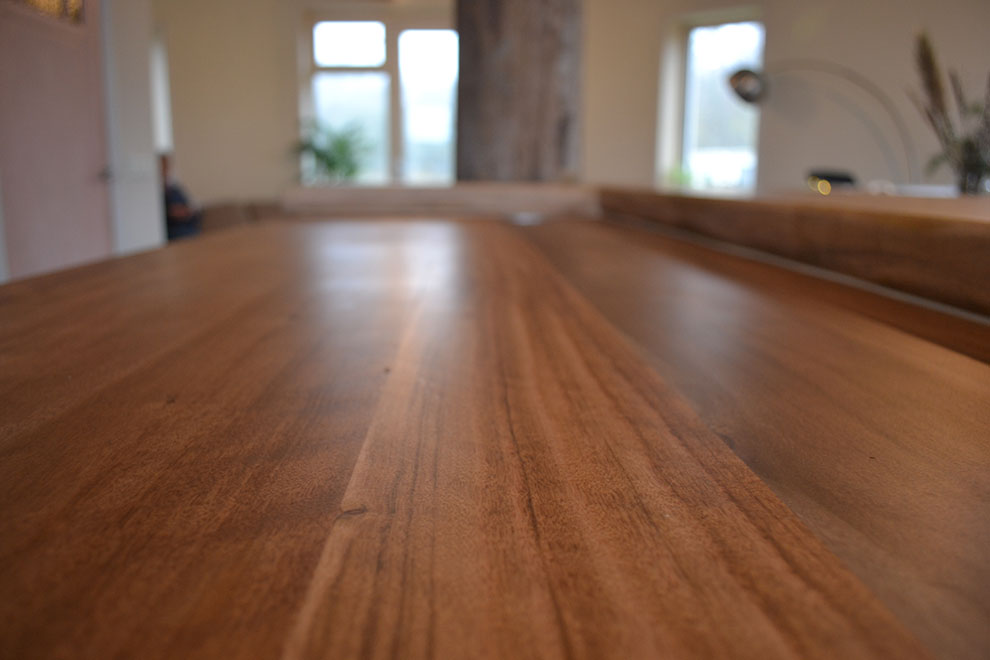 Foundations laid, the house started to go up in December 2019 and was ready for the family to move in the following August. They’re now enjoying living in it. It’s airy and light, the thick walls make it soundproof and all the exposed rich-hued timber adds to an air of calm.

“Working on the house with the architects and contractors, it’s clear more education is needed, both about the technical performance of the material and also its environmental credentials. We found there’s still an assumption that using tropical timber means destroying the rainforest, whereas if sustainably sourced it can play a vital role in maintaining it,” said Wilson. “Also when I showed pictures of the house to the company that supplied the timber, they said ‘wow, we didn’t know you could do all that with what we sent you’. So there’s obviously a need to inform suppliers too about the market potential of their timber.”

It strikes you that Wilson’s house itself could be a valuable educational tool in this two-way tropical timber learning process.

back to the list
Bridge to a sustainable future