Since 2013, ATIBT has implemented a major program to involve the private sector in FLEGT, REDD+ and certification processes. This program is currently coming to an end after 7 years of implementation in 5 countries. 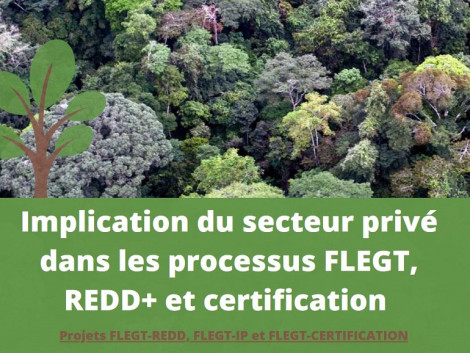 Over the past 40 years, numerous initiatives have been launched to improve forest management. The concept of sustainable forest management certification emerged in the early 1990s. Subsequently, in the 2000s, the FLEGT Action Plan, an institutional initiative, was published by the European Union. The action plan takes a unique approach and combines measures to be taken by wood-consuming and wood-producing countries, such as the FLEGT VPAs and the EUTR. At the end of this decade, the REDD+ process, an international and transnational initiative is launched to combat global warming caused by greenhouse gas emissions from forest degradation, destruction and fragmentation.

Implemented for several years in the Congo Basin, the VPAs have fallen behind (negotiations and implementation slowed down), and certification, after a slump between 2004 and 2009, was running out of steam.

ATIBT, as the representative of logging companies, forest industries and stakeholders in the tropical timber sector, has been asked, in partnership with national professional associations, to implement three major projects aimed at involving the private sector in the FLEGT, REDD and certification processes :

The interventions took place in the following countries :

This large "three in one" project, which also included a multitude of other sub-projects such as the FLEGT VPA support project in the Republic of Congo and FAO-EU-FLEGT projects in the target countries, enabled ATIBT to:

Even if the end of the project was impacted by the health situation, the activities were carried out thanks to the FLEGT-certification referents set up within the professional associations, and many meetings were held by videoconference and through webinars. The majority of these projects ended on 31 December 2020.

Impacts and major achievements in a few figures :

The end-of-project brochure is available in French here !

Great achievements in a few clicks :

EKWATO : An innovative tool for companies in the timber industry (DDS, EUTR/UKTR)
back to the list
Gabon wants to adopt new standards to position itself as a world leader in certified tropical timber