The Tropical Forest Symposium took place in Berlin last week. It was an opportunity to draw political attention to a major issue, a few weeks before the COP15 on biological diversity and the COP26 on climate change. 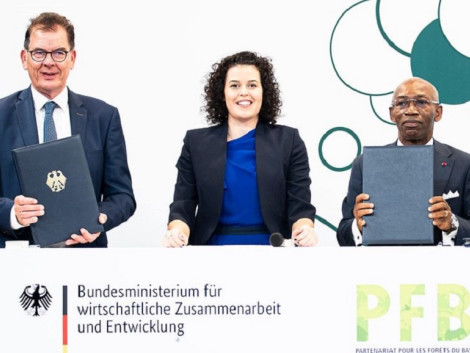 During this event, in which its president Olman Serrano participated, the ATIBT had the opportunity to exchange with several ministers, as well as with partners such as COMIFAC, the GIZ or the BMZ on crucial topics for the Congo Basin.

« Climate and biodiversity cannot be saved without tropical forests »

As we reported last week, the German Federal Minister for Economic Cooperation and Development, Gerd Müller, agreed with representatives of the Congo Basin countries to strengthen efforts to preserve the tropical forests of this region, the second largest tropical basin in the world. For the German minister, these protection measures must include the fight against illegal timber: above all, work must be done to establish transparent supply chains for timber from the region. In addition, the indigenous population, considered as the "guardian of the forests", must be closely involved to make the forest a local source of income while respecting the forest ecosystems.

Germany has thus announced an additional 125 million euros for the preservation of the forests of the Congo Basin. As Gerd Müller emphasized, "climate and biodiversity cannot be saved without tropical forests. "We must immediately stop the burning and destruction of forests," he warned. "We need a Fair Deal for the protection of forests. At the Berlin Conference on Tropical Forests, the ten countries bordering the Congo Rainforest committed themselves today to strengthening forest protection and sustainable forestry by signing a declaration. The declaration was developed in collaboration with scientists and civil society in the Congo Basin countries. We support this process through the Central African Forest Initiative (CAFI). The goal is to protect and restore 127 million hectares of forest by 2030, which is three times the size of Germany."

Recall that the German Ministry of Development had already established the World Nature Heritage Fund in May 2021. By 2030, a capital stock of $1 billion should be in place to provide core funding for 30 of the major nature reserves. The Fund will then be the world's largest foundation for nature protection. Germany has provided $100 million in seed funding.

Photo : Federal Development Minister Gerd Müller (left) and Jules Doret Ndongo, Minister of Forests of Cameroon and President of the Central African Forest Commission (COMIFAC) (right), after the signing of the Declaration on the Protection of the Tropical Forest in the Congo Basin on September 7, 2021, with host Katie Gallus