Tropical forests at the IUCN Congress

The International Union for Conservation of Nature (IUCN) summit ended in Marseille on Friday, September 10, 7 days after its inauguration. A number of ATIBT members participated, sometimes with a stand. It was above all a return to direct meetings between many people who had only seen each other through screens for many months! 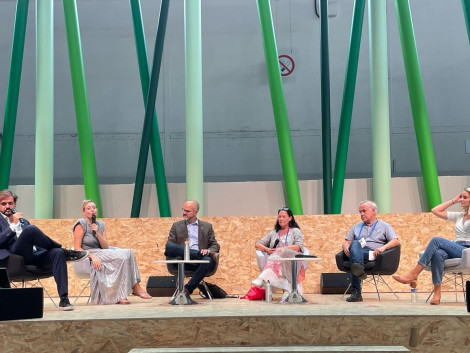 We present here a review of the participation of our sector in this event considered as "the largest global event ever organized on biodiversity", and which is according to some a prelude to the COP 15 on biodiversity, which will take place in October.

For our sector related to the management of tropical forests, it is difficult to indicate everything that was said, of course, because of the importance of biodiversity present in tropical forests (more than 50% of global biodiversity). We can nevertheless highlight various meetings, with the participation of the ATIBT in a Business Forum for the establishment of sustainable value chains in Africa at the initiative of France and Gabon, which we reported last week in our newsletter.

The speech from the ATIBT on the occasion of this forum can be found here (in French).

In addition, an important meeting of the Alliance for the Conservation of Rainforests, with the participation of Plinio Sist (CIRAD) took place. The Alliance illustrates the commitment of France for the preservation of tropical forests in the continuation of the COP21 in Paris and in view of the next COP26 on climate and CPO15 on biodiversity.

Also noteworthy is the participation of ATIBT in a meeting with the Elyx Foundation, which has been accompanying the United Nations for several years in promoting the Sustainable Development Goals. With the Foundation, ATIBT was able to have an exchange of 1h30 on the theme "Biodiversity as a legacy for future generations: Sustainable management of tropical forests as part of the solution".  This public debate took place with the managers of the foundation, Yacine Ait Kaci and Adeline Pilon, as well as with Monique Dupuis, General Inspector of National Education in charge of themes related to biodiversity, and Jean Christophe Carteron, founder of Sulitest.

Sulitest a training and evaluation tool on sustainable development with which ATIBT has already planned to collaborate, which we will inform you about with more detail soon.

On a general level, the IUCN World Conservation Congress ended with the adoption of a series of motions[1] that highlight the existence of solutions to protect biodiversity. Even if the motions voted by 1400 members have no binding force, the intention is to influence the States that will soon negotiate at the COP 15 (China, October 2021) and to commit them to reduce by half the ecological footprint of our consumption and production patterns. Among the motions voted at IUCN, we can mention those that aim to protect and sustainably manage 80% of the Amazon rainforest (motion 129), recognizing the crucial role of indigenous communities in the conservation of ecosystems (motion 045). IUCN members also made a recommendation in Motion 135 on the link between nature conservation and pandemics: "States will not prevent future pandemics from emerging without recognizing the links between nature and health, and without committing to combat risky wildlife trade and land conversion.

To take up the IUCN recommendations, ATIBT and its partners call on EU states to adopt binding measures now to enshrine sustainable consumption patterns and promote the sustainable management of tropical forests.

The update of the red list of endangered species was also on the agenda, with IUCN complementing the work of CITES on threatened species. Reassessed each year, this indicator of the state of biodiversity in the world is divided into eight categories, ranging from "insufficient data" to "extinct". The list now includes "nearly 140,000 species, of which about 40,000 are threatened with extinction," according to the medias.

The Komodo dragon is "critically endangered", with only 6,000 individuals remaining in eastern Indonesia, even though the species has been present in this territory for millions of years. The reason for the decline is hardly original: climate change.

[1] Motions are the mechanism by which IUCN Members influence third parties and guide IUCN policy and programme. Members vote to approve motions, and once adopted, they become Resolutions or Recommendations, and thus form the body of IUCN policy.