Paris initiative for the conservation of Central African forest: sustainable forest management, a solution to preserve the second lung of the planet

As we reported in our previous newsletters, the City of Paris and the newspaper Le Monde organized on October 6th a day on the theme of the preservation of Central African forests.

ATIBT team was able to attend live, at the Paris City Hall. 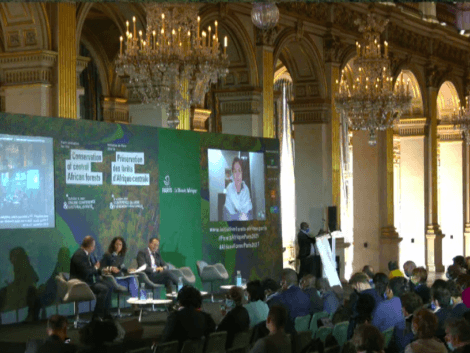 As a reminder, the international conference in Paris to understand and preserve the forests of Central Africa and its populations brought together local authorities, representatives of associations, universities and entrepreneurship, as well as experts and major European and African witnesses who called for the need to act to preserve this region.

The meeting was structured around plenary sessions and round tables, focusing in particular on 4 crucial issues:

We would like to come back to this day to underline the way in which the interventions, and in particular those of the representatives of the Congo Basin countries, have highlighted the benefits of sustainable forest management and certification for the preservation of ecosystems and economic and social development. However, this conference is taking place in a particular context, that of the exclusion of tropical timber by the Société pour la Livraison des Ouvrages Olympiques (SOLIDEO) from the construction of the Olympic structures for the Paris 2024 Summer Olympics.

The forests of the Congo Basin are the second largest tropical forest massif, after the Amazon. It is home to an exceptional natural heritage, both in terms of its faunal and floristic diversity, and allows for the sequestration of 140 million tons of carbon per year (Pr. Lee White). As such, it represents a crucial stake in the preservation of global biodiversity and in the fight against climate change, as Lee White, Gabonese Minister of Water and Forests, clearly summarized in one sentence: "If we lose the Congo Basin, then we lose the battle against climate change.”

In view of the complexity and intermingling of these main issues, the question of forest resource management arises, in a context where the growing population has increasing needs for housing and food. It appears that the preservation of tropical forests must be combined with economic and social development that respects both ecosystems and populations. In this respect, sustainable forest management (SFM) appears to be an adequate solution. As many experts have pointed out, well-managed and controlled logging contributes to sustainable forest development (Alain Karsenty, CIRAD). Certification systems are not perfect, but they are constantly improving. In fact, various scientific studies on the subject conducted in recent years have shown that well-managed logging has little impact on forests, and can even serve as a connecting network between different protected areas (Sylvie Gourlet-Fleury, CIRAD. Watch her presentation). To do this, a simple principle must be respected: do not exploit more than the renewal rate of the species allows, a principle taken into account by certification systems and management plans. Satellite images show how deforestation is present around a sustainably managed concession, while the forest cover is preserved within the concession (Stéphane Glannaz, Precious Wood. Watch the presentation). Moreover, the timber-forest sector provides employment and income for a young population, the vast majority of which is active. Sustainable forest management can and should be inclusive for local populations. In the future, sustainably managed forests could be considered as protected areas, preserving the fauna and flora, but also ensuring respect for the rights of indigenous peoples by securing land and avoiding their eviction in favor of protected areas or natural parks (Geoffrey Mauvais, IUCN. Watch the presentation). By considering sustainably managed forests as protected areas, we would open the door to the development of a healthy economy, bringing social benefits, and respecting forest ecosystems by including rather than excluding.

Nevertheless, recognizing the benefits of sustainable forest management and tropical timber certification is not enough: France, and more generally Europe, must open its market to certified tropical timber. As Gabonese Minister Lee White has pointed out, tropical timber producing countries are well aware that Europe will not buy timber if it is illegal, threatens biodiversity and endangers indigenous peoples. The governments and forestry companies involved in certification are making costly efforts to develop a sound and virtuous industry. But it is up to European actors to support these efforts and create a sustainable forest economy by opening their markets to certified timber that guarantees forest protection and local economic and social development (Watch the discussion). To develop this healthy market, it is necessary to develop an interconnection between the local, national and international levels, and to give a place and value to certified tropical timber. In this sense, SOLIDEO decision to ban the use of tropical timber is not wise and could even be counterproductive by discouraging efforts to improve forest management in producing countries.

We hope that this day rich in exchanges will have given food for thought to the SOLIDEO to open its market to certified tropical wood for an event as international and symbolic as the Olympic Games.

The newspaper Le Monde has posted on its website videos of the day. Find them below (in French):

A look back at the "Tropical Timber" diplomatic mission to Paris, led by the Ministers of Forestry of Cameroon and Congo as well as by COMIFAC
back to the list
ATIBT's response to the article "Cut less and let rest: a new management of tropical forests is needed”