Convening under the theme “Building a Green, Healthy and Resilient Future with Forests,” the Fifteenth meeting of the World Forestry Congress (XV WFC) sought to define the role of forests in the 2030 Agenda for Sustainable Development and other major agreements, including the Global Forest Goals, the Paris Agreement on climate change, and the post-2020 global biodiversity framework. During the five-day meeting, participants addressed a wide variety of themes, including: the UN Decade on Ecosystem Restoration; Forests for a Healthy, Prosperous and Peaceful World; and Sustainable Pathways for Building a Green, Healthy, and Resilient Future. 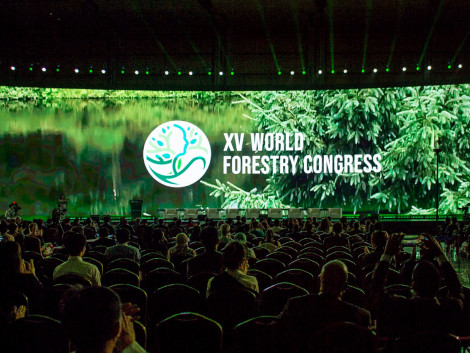 Here is an overview of the highlights of this Congress for our sector.

HE Rosalie Matondo, Minister of Forest Economy, Republic of the Congo, said Congo Basin countries decided to stop exporting timber and to process it locally. In response to a question from the moderator on the embargo on tropical timber products at the 2024 Paris Olympics, she stressed that Congo Basin timber products originate from SFM and not illegal logging and expressed frustration at the lack of evidence behind such policies.  She also highlighted reforestation efforts, expansion of conservation areas and legislative efforts to preserve forests. She noted the lack of funding for the Congo Basin area and called for a more targeted, tailored, transparent financial mechanism.

Sheam Satkuru, ITTO, said a lack of trust means that tropical timber producing countries have to jump through hoops to prove that international standards are being met. She noted the need for effective communication on compliance, as well as an effective governance system to change perceptions of tropical timber producing countries. Moreover, Robert Nasi, CIFOR, noted the need to invest more in forestry, saying the technological solutions exist.

Noting that Gabon is carbon positive, Lee White, Minister of Water, Forest, the Sea and Environment, Gabon, said REDD+ cannot generate enough jobs and that, given the enormous impact that deforestation of the Congo Basin would have worldwide and the livelihood needs of people in the region, the survival of forests there cannot be gambled on the voluntary contributions from developed countries. Lee White said the solution to Gabon’s oil dependency and young population lies in SFM and maximizing the value-added for timber products, highlighting the creation of jobs in peri-urban timber processing hubs. He underscored the need for certification of socially responsible, climate-neutral, and biodiversity-safe practices.

Summarizing the discussion, Robert Nasi, CIFOR, noted that while “bioeconomy” is not a new concept, its importance needs to be communicated outside of the forest sector. He noted that according to the IMF, fossil fuels are subsidized at a rate of a million dollars a minute, and that this needs to be redirected to climate-beneficial bioeconomy activities.

Thomas Hofer, FAO, highlighted the key findings from the upcoming FAO-CIFOR review on mainstreaming biodiversity in forestry. He noted SFM, managed for production and other benefits outside Protected Areas, has a critical role in biodiversity conservation. As forest resources continue to decline, effective interventions are needed to better mainstream biodiversity within the forest sector.

Finally, participants agreed that sustainable production mitigates climate change and offers solutions across value chains, and that scaling up bioeconomies by using sustainable wood could replace carbon-intensive sectors. Amongst other things, participants called for the inclusion of sustainable wood-based solutions in Nationally Determined Contributions (NDCs) by 2030.

The ATIBT had exchanges this week with the FAO team back from Seoul, in particular with Sven Walter, who is on the ATIBT Board, and Thais Linhares-Juvenal, who is in charge of the Sustainable Wood for a Sustainable World programme, SW4SW. Both expressed their wish that some of the statements made in Seoul would be taken up at the ATIBT Forum.

The reports of the Congress are available here.

Ministerial call for sustainable timber at the World Forestry Congress in Seoul
back to the list
Seeds for the UFA-REFOREST project, in Cameroon