For the 70th anniversary of the ATIBT, a retrospective through interviews with its presidents

For its 70th anniversary, ATIBT current president and three of its former presidents met at the Jardin d'Agronomie Tropicale in Nogent-sur-Marne: together, they recalled the historical evolution of the Association and discussed its perspectives for the years to come. One of them, H. Stoll, was interviewed at his home in Germany. 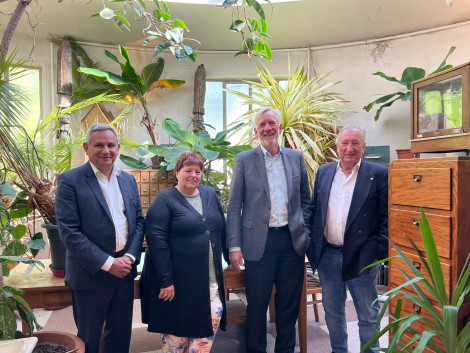 These films, which you can watch here, are an opportunity to look back at the history of the Association and its major moments to better understand its role as a key actor in the sustainable management of Central African forests. They were filmed in CIRAD historical library, in the Jardin d'Agronomie Tropicale in Nogent-sur-Marne.

The years 1950 to 1980 mark a long period of cooperation with the Tropical Forestry Technical Center (CTFT), located in ... Nogent-sur-Marne, where the current offices of ATIBT are located! ATIBT, created in 1952, and the CTFT then apply themselves to develop technical knowledge on tropical woods: they publish for the first time in the early 60's the general nomenclature of tropical woods, which ATIBT has since been updating. The Association also establishes at that time the rules of classification of logs and sawn timber and trained a good number of experts and classifiers. In order to better target the interventions, the first commissions are quickly created and organize the promotion of tropical timber. A number of technical publications are published in the 1970s and 1980s, notably the Tropical Timber Atlas by continent (Africa, Asia and South America).

The last 15 years of the 20th century see the issue of tropical forest management come to the fore. It is no longer a question of exploiting timber without planning the management of the territories, and thinking about the interaction between industrial activities in the forest-wood sector and other uses of the forest areas. In 1986, Dr. Stoll creates the Forestry Commission, while the first forestry management plans in the Congo Basin are soon being drawn up.

In the late 1990s, ATIBT reorganizes itself to adapt to emerging issues and to meet the needs of its members. The Interafrican Forest Industries Association (IFIA) is created, and European foresters become involved in forest management, while ATIBT conducts research on sustainable management of tropical forests. ATIBT and FAO co-publish in 1997 a study entitled "Road infrastructures in tropical forests: road to development or road to destruction?”.

The turn of the 21st century raises many issues related to forest management plans: forest production must obviously be taken into account, but also social aspects, wildlife aspects and recommendations for certification. Reflections are developing around reduced impact logging methods (IRL). To accompany its members in these evolutions, ATIBT develops its professional training activities on forest management and trains for example on directional felling. It also develops grading rules (SATA, AINP, Veneers).

In addition, the prioritization of forest management puts the legality of timber and certification at the center of concerns. The first forest concessions acquire an FSC Sustainable Management certificate in the late 1990s/early 2000s. ATIBT has been cooperating with legal and sustainable management certification schemes to promote and develop forest certification in the Congo Basin, and more broadly in tropical timber producing countries. Since 2011, the Association has been supporting the implementation of national PAFC schemes in the Congo Basin countries to encourage the increase of certified areas.

In 2022, after 70 years of existence, ATIBT is still committed to supporting forest certification and promoting tropical timber from sustainably managed forests. The emergence of the climate issue and environmental challenges have prompted ATIBT to accompany the actors of the tropical wood sector towards a responsible production and trade by taking into account the multidimensionality of the sector where environmental, social and economic aspects are inseparable. These 5 films are a nice tribute to ATIBT and to the people who have invested in improving the tropical forestry-wood sector.

EU regulation against deforestation: the forestry and wood industry recalls the stake of this project on sustainable forest management
back to the list
Publication of the ATIBT annual report: (re)discover the key actions of the Association in 2021