On 28 June, the Environment Council of the Council of the EU (European Union) adopted a general approach on the proposed EU regulation on imported deforestation which will guide the upcoming negotiations between the European bodies, and which could limit the possibilities of modification. This meeting was chaired by the French Minister for Energy Transition, Mrs Agnès PANNIER-RUNACHER. 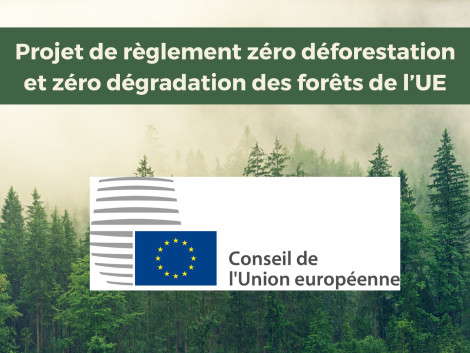 After 6 months of discussion within the EU Council, the objective of this meeting was to obtain a "compromise establishing a good balance between ambition and realism of the envisaged provisions".   Thus, several compromise texts on different aspects of the proposed regulation were adopted, notably on the scope of the regulation, definitions, proportionality of the provisions, the administrative burden linked to the implementation of the regulation and cooperation with third countries.

On 24 January 2022, the EU Commission presented its proposal for a regulation on deforestation and forest degradation to the EU Council.

Please feel free to read or re-read the FAQ written by the ATIBT on the Commission's proposal for a regulation.

Following this presentation, the Council of the EU held two orientation debates on the regulation, in its Agriculture and Fisheries configuration on 21 February, and in its Environment configuration on 17 March. An ad hoc working group (consisting of representatives of the environment and agriculture sectors) met a total of twelve times and held substantive discussions on the proposal. As a result of this work, several compromise texts were adopted at the Environment Council on 28 June, constituting the general orientation of the EU Council on the deforestation and forest degradation regulation.

You can download the EU Council's orientation text by clicking here.

A few days before the adoption by the EU Council of a general approach, the ATIBT had shared the position of the forest-based sector on the regulation. You can read or re-read the article by clicking here.

On 12 September 2022, the Parliament should adopt its position during a plenary session. Afterwards, a trialogue can be held between the EU Commission, the EU Council and the EU Parliament.

While the scope (coffee, cocoa, palm oil, soya, beef and timber) proposed by the Commission remains unchanged, we would like to go over the main changes in the compromise text and in particular the elements of the definition of forest degradation that could impact on the timber sector.

The ATIBT through its working group on "imported deforestation" proposes: 1) to ban the term "primary forest" in favour of "natural forest"; 2) to stop allowing degradation of anything that is not "primary forest".