As part of the validation process of the draft manual of procedures for the approval of private certification systems in the SVL of the VPA FLEGT of the Republic of Congo (which started in February 2020),  was held on October 22 2020, at the Ministry of Forest Economy a workshop, under the high patronage of Mr. Pierre Taty, Chief of Staff of the Minister of Forest Economy.

The different stages leading to the validation of this draft manual are presented below. 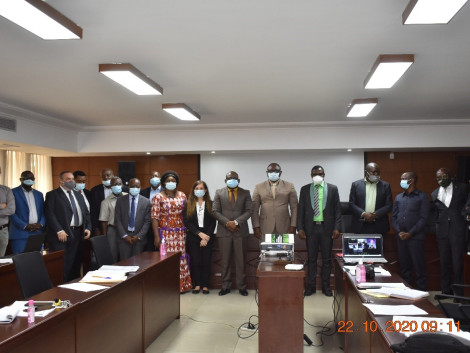 As part of the implementation of the FLEGT IP and PPECF-COMIFAC projects financed by the EU and the KFW, ATIBT has mobilized a service provider since February 2020 to provide technical support to the CLFT relating to the development of a manual of procedures for the approval of private certification systems within the framework of the SVL of the VPA FLEGT Congo.

The consultant carried out a first mission in the Republic of Congo as part of the start of the study. It was for the Consultant to meet the different stakeholders individually or in groups.

After consultations with them, the consultant produced a first version of the manual which was shared with all these parties (IGSEF, CLFT, DUE, FLEGT facilitation, OC, forestry companies, Experts in audits and certification…) for contributions. Several other versions were produced after discussions with the parties following their comments.

At the end of July, ATIBT received a version of the Manual incorporating proposals for modifications / comments from EUD and DG DEVCO, with support from EFI. According to the EUD, these proposed modifications or comments do not, at this stage, represent the Commission's position. The consultant then analyzed these comments and provided some clarifications in a new version which was sent to the DUE, after a working meeting (call skype) with ATIBT.

ATIBT (with the support of the consultant) organized on September 15, 2020 by videoconference a working session on the analysis of the observations and recommendations formulated by the private sector after rereading the draft manual of procedures for the approval of private certification systems under the SVL of the APV-FLEGT of the Republic of Congo. Seven people participated in this meeting, among which: 04 forestry companies, the ATIBT referent, the ATIBT projects coordinator and the Consultant. At the end of this working meeting, no participant expressed any reservations about the manual. So there was consensus. In addition, the private sector wanted the validation of the procedure manual and its implementation to be done within a fairly short timeframe.

The consultant carried out a second mission to the Republic of Congo from 20 to 23 October, with a view to carrying out the final consultations and exchanging with stakeholders as part of the preparation of the validation workshop.

After all these steps, the validation workshop for the draft procedure manual took place on October 22 in the conference room of the Ministry of Forest Economy.

The workshop started with the protocol phase. The opening speech was delivered by the Director of the Cabinet of the Minister of Forest Economy, after the words of welcome from the Director General of ATIBT and DUE. Mr. Pierre Taty recalled the stakes of this draft procedure manual, invited all participants to a careful analysis of the document with a view to improving it and expressed confidence in the quality of the expected results.

After presentation of the manual by the consultant and discussions, the draft manual was validated by acclamation by all the participants, both face-to-face and by video. A roadmap has been defined and adopted for the next steps of the process, including those mainly responsible for its implementation, the origin of the funds and the deadlines.

The workshop ended with a speech by the Inspector General of Forest Economy Services. He congratulated all the participants for the quality of the exchanges, the comments and the multifaceted contributions which made it possible to improve the document and lead to its validation. He said he was very satisfied with the results of the workshop and ended his word with thanks to participants and donors.

VPA FLEGT Gabon: UFIGA works for the resumption of vpa flegt negotiations between Gabon and the European Union
back to the list
Statement of taxation-parafiscality in the forest sector in the Democratic Republic of Congo