One Planet Summit "mobilize and act for biodiversity"

The 4th edition, organized by France with the support of the United Nations and the World Bank, was held on January 11, 2021. 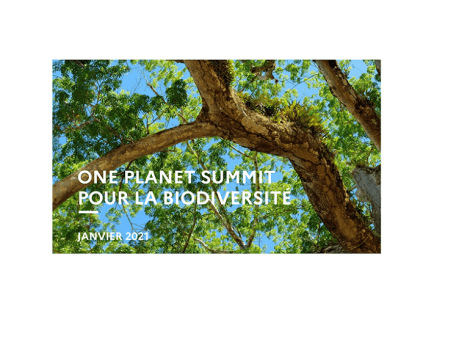 The link between climate change and the degradation of biodiversity is no longer to be demonstrated. In addition, the decline of ecosystems and natural habitats increases the risk of disease transmission from animals to humans, as is the case with coronavirus.

The One Planet Summit, held mainly by videoconference, federated political mobilization by proposing concrete and innovative solutions to protect biodiversity.

11 Heads of State and Government participated : Canada, Costa Rica, the Democratic Republic of Congo, France, Germany, Italy, Mauritania, Monaco, the Netherlands, Norway and the United Kingdom, as well as the Secretary-General of the United Nations, the Prince of Wales, the President of the European Commission and the President of the European Council and business leaders, civil society leaders and other representatives of international organizations.

Four themes were discussed in particular : (i) The protection of marine and terrestrial areas; (ii) the promotion of agroecology; (iii) the financing of biodiversity; and (iv) the protection of tropical forests, species and human health.

Below, we present the main conclusions and decisions taken :

Protection of marine and terrestrial spaces

The Coalition of High Ambition for Nature and Mankind now includes 52 States that are committed to working to protect 30% of land and marine areas by 2020. France is committed to this goal by 2022.