The ATIBT met the Malaysian Timber Council (MTC) in Paris on October 18. This meeting, which was also attended by Mr. the Ambassador of Malaysia in France, His Excellency Dato’ Modh Zamruni Khalid, and Mr. Hugues Soundat, Counselor of the Chancellery at the Embassy of Gabon in France, as well as Arnaud Hétroit, Manager of Le Commerce du Bois, aimed to discuss the decision of the SOLIDEO and to reflect together on the implementation of synergies to promote responsible tropical timber on the European markets. 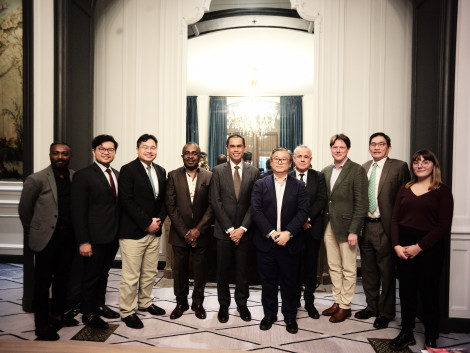 This meeting comes at the invitation of the MTC, while the SOLIDEO (Society for the delivery of Olympic works) has excluded timber of exotic and boreal origin outside the EU in the specifications of environmental excellence of the Olympic Village. ATIBT and LCB have been in discussion for several months with the City of Paris and the SOLIDEO organization in charge of the construction of the Olympic Village of Paris 2024. The two organizations wrote a letter to the Paris City Council last April and received a reply to this letter in July.

During the week of October 4, ATIBT accompanied a delegation of forestry authorities from several Central African countries to defend the value and place of certified tropical timber on European markets. ATIBT also attended the day of conferences organized on October 6 at the Paris City Hall.

During the meeting with the MTC, the discussions mainly focused on the issue of the image of tropical timber on the European markets, an often erroneous image that led to an irrelevant decision of the SOLIDEO. Tropical timber suffers indeed from a bad image in Europe because it is associated with deforestation. Public opinion is therefore generally opposed to its use in European markets. However, this public opinion seems to ignore the capacity of sustainable forest management to protect the forest resource: by giving it an economic value, it contributes to its preservation by not taking more than the renewal rate of the resource, and it is a source of economic and social development for the populations. Unfortunately, SOLIDEO seems to have taken public opinion more into account than reality. The political context in France has certainly played a role in this decision, a few months before the presidential elections.

Companies in charge of the construction of the Olympic Village have themselves stressed that the exclusion of tropical timber poses a problem from a technical point of view: tropical timber is difficult to replace for certain uses, and some parts will have to be changed much more often if they do not use tropical wood.

In addition to these technical aspects, another dimension comes into play: for several years now, producing countries have been subject to restrictive legislation, and many efforts have been required of them to meet the requirements of the European markets in terms of legality and certification. It must be emphasized that the issue of tropical timber is not only political, but also diplomatic.

In the event that SOLIDEO does not change its decision, the idea was raised with MTC to build outside the Olympic Village an emblematic tropical timber construction that would serve as a "life-size" communication tool.

ETTF reacts to the new EU project on deforestation-free commodities
back to the list
The ADEFAC project continues, with numerous field activities in Central Africa