“Mahogany, a pillar of the rainforest, needs support”

Here is an article written by ITTO's Executive Director, Ms. Sheam Satkuru, and published in the online magazine Mongabay, about a well-known tropical forest tree: mahogany. 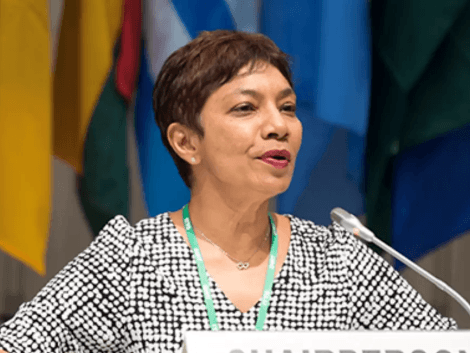 “Mahogany is everything you would want in a tree: tall and majestic, with leaves up to half a meter wide that cast cooling shade on the forest floor below. It is a towering pillar of many tropical forests, and even tree plantations in the Philippines, but the commercial value of its reddish-brown wood, renowned for both beauty and strength, has been its undoing in the wild.

The bigleaf mahogany, Swietenia macrophylla, stands out in these forests, not just for its size and commercial value but also for its role in ecosystems. The species is important in reforestation efforts in Indonesia and worldwide, removes more carbon dioxide from the atmosphere than many other tree species, and releases organic compounds that help prevent the sun’s heat energy from reaching the earth’s surface—further assisting in the fight against climate change.

As report after report continue to raise the alarm, tropical deforestation has taken center stage in the conversation around climate change culprits. In Brazil, Amazon deforestation exploded in the first quarter of 2022 after years of continuous growth, and the entire forest is getting perilously close to a point of no return. But forests throughout Central and South America, and the rest of the world, have long been threatened by expansion of agriculture and mining developments, other land uses, and even organized crime.

For centuries, mahogany has been the wood of choice for furniture and cabinetry. Mahogany has also been praised by musicians and guitar makers for its strength and resistance to changes in humidity and temperature.

When the natural prevalence of mahogany in tropical forests was last assessed across its range, back in 1998, biologists categorized the tree as “vulnerable to extinction”—the same category as cheetahs and polar bears, iconic species that are well known to be threatened. We romanticize endangered charismatic megafauna, but we often take the big trees for granted.

The 1998 assessment found that mahogany had been reduced to about one-third of its historic range. Despite the apparent overlap in places where deforestation has wreaked havoc and where the tree has been found historically, such as the southern Amazon, mahogany and a number of other endangered trees have not been comprehensively reassessed.

All the major international meetings addressing climate change have featured discussions on how tropical deforestation threatens biodiversity, yet there have been no efforts to reassess populations or identify key remaining stands of threatened tree species at the global level.

One of the places where we know that mahogany has been thriving in the wild is the Yucatan Peninsula, where Mayan communities depend on mahogany timber for their livelihoods. These communities manage the forests on their lands so that timber harvesting does not change the ecosystem irreversibly.

In the Peten region of Guatemala, a study supported by my organization (ITTO) found that community concessions where mahogany trees were harvested in the mid-2000s under sustainable forest management parameters will recover or exceed initial commercial densities and volumes during cutting cycles between successive harvests.

In other words, the forest environments are being maintained over time—which is in stark contrast to the rest of the country, which lost 34% of its total tree cover over the past two decades. But making sure that timber harvested in this way is accepted as sustainably sourced is difficult for small communities that lack the marketing power of, say, a multinational corporation.

Today, with a price as durable as its wood, the illegal logging of mahogany continues in Central and South America—but, in contrast, the deforestation of mahogany-rich forests has been reduced to almost nothing in these communities.

Mahogany is not the only valuable tree in the rainforest, of course. A wide variety of equally valuable rosewoods grow throughout the world’s tropical regions, for example, and most are endangered. Relentless demand for the wood—used for high-end furniture and other finished products—provides extreme commercial pressures.

The timber of ipê—comprising seven species in Central and South America—is strong, resistant to fungal infections and insect damage, and has the same fireproof rating as concrete and steel. Some ipê species have not been over harvested to the same extent as mahogany and the rosewoods, but the clearing of Amazon rainforest has hammered others.

An increasing number of tree species (including mahogany) are listed in Appendix II of the Convention on International Trade of Endangered Species (CITES). For trade of these species to occur, countries must provide data that shows the timber was legally harvested and that its trade will not further endanger the species.

We need better enforcement of existing laws and treaties to prevent illegal logging, but equally we must ensure that sustainably sourced lumber remains a staple of livelihoods for forest-dependent communities like those in the Yucatan. Vigilant monitoring of valuable timber species would help reveal the damage that two decades of deforestation and illegal logging has wrought—and steer a path that maintains both threatened species and the valuable forests in which they grow.

In the end, economics must play a leading role if we are to turn the tide on tropical deforestation. The conservation of high-value timber and other forest products will be more successful when sustainable trade produces decent returns for forest owners and managers. This is one of the surest paths to reducing the magnitude and impacts of climate change for generations to come.”