The new Blauwe Loper – or Blue Carpet – tropical timber pedestrian and cycle bridge in the Netherlands has been heralded as a trendsetter in circular, bio-based construction. Reinforcing its environmental credentials, it is even designed to be bat friendly. The $6.5 million bridge is 800m long, taking the title of Europe’s longest cycle bridge from the Sölvesborg-bay bridge in southern Sweden. 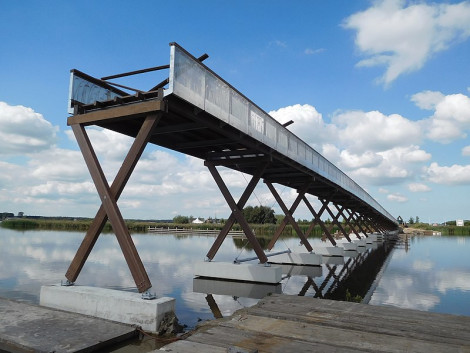 The company behind the Gabonese azobé structure is timber supplier, processor and construction specialist Wijma Kampen.
“We undertook the prefabrication of the azobé deck and cross-supports, the engineering, and installation of everything on site on the concrete abutments, which were provided by project partners, infrastructure engineering and construction operator Strukton Civiel and building contractor Oosterhof Holman,” said Wijma Kampen Managing Director Ad Wesselink.
The client for the project is the municipality of Oldambt in Groningen province and the bridge links the town of Winschoten with Blauwestad, a new village built on reclaimed land.

About the Azobé specie

The azobé itself is inherently durable and the deck has also been designed so that the wood is well ventilated, adding to the structure’s lifespan. The builders say it will last for at least 80-years.
“And all the timber is 100% sourced from FSC certified, sustainably managed forest,” said Mr Wesselink.
“In total we used about 375 m3, 355 m3 net after planing, or around 450 tonnes.” 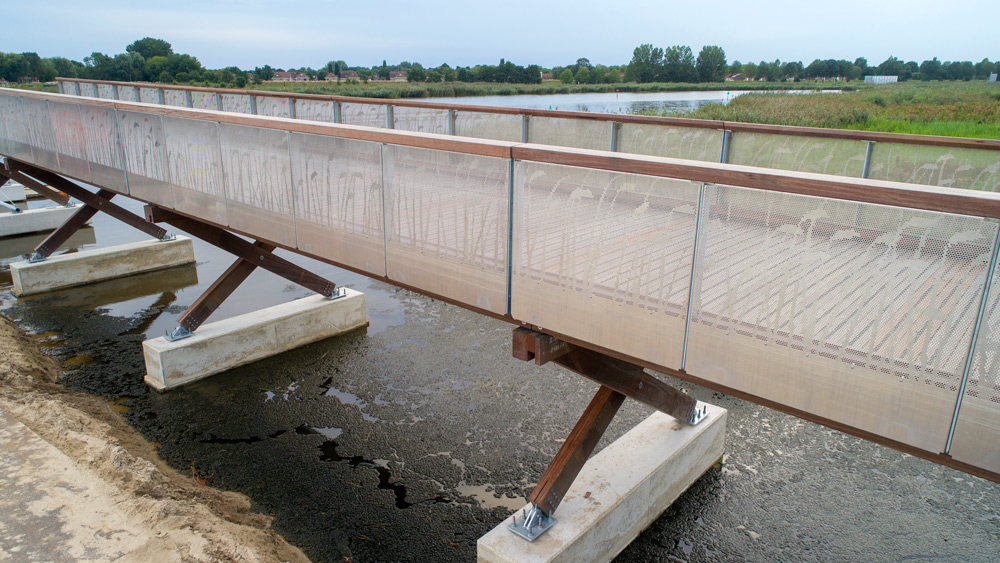 The construction process has been demanding, both in terms of delivering and erecting the timber superstructure and the concrete foundations. One of the greatest challenges was erecting the single-piece section, which runs over the A7 road. The span is 42m long, 3.5m wide and weighed 90 tonnes. Delivering this by road would have posed significant logistical issues, so instead it was loaded on a barge and towed to Winschoten by waterway. To minimise disruption, it was then craned carefully into place over the road and fixed in position at night. 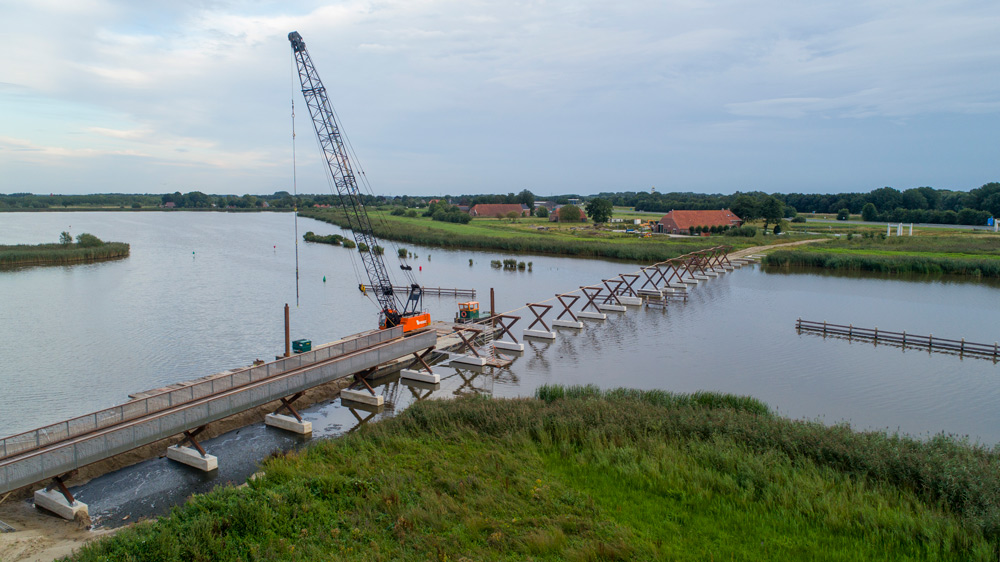 Fleur Gräper, Groningen regional deputy for infrastructure and mobility acknowledged that the bridge was a sizeable investment.
“But it’s a technically demanding structure and it is costing a lot less than a bridge for cars,” she said. “There are also the longer term environmental and health benefits in terms of encouraging more people to walk and ride their bikes to work, for shopping and for leisure – Blauwestad is built alongside a new lake, which is also a nature reserve, so a very recreational area which is attracting people from Winschoten. Now they can cycle there. That will ultimately make it even cheaper than a bridge which encouraged people to drive around!”
Ms Gräper also explained the bridge’s bat-friendly aspect.
“Bats have been shown to use infrastructure features, such as bridges, as guide points from one site to another, and while they navigate by echo location, they are also very sensitive to bright lights, which can disorient them,” she said.
“So special lighting has been installed on the Blauwe Loper with a different colour (to standard street illumination) and to cast a different light and shadows on the bridge so bats are not dazzled and confused.”
Ms Gräper also envisaged the Blauwe Loper becoming something of a showcase for use of sustainable tropical timber in construction.
“We looked into all kinds of ways to make the bridge environment friendly, which led to us choosing wood,” she said.
“I can imagine tourists will find that very interesting and come over to see it.” 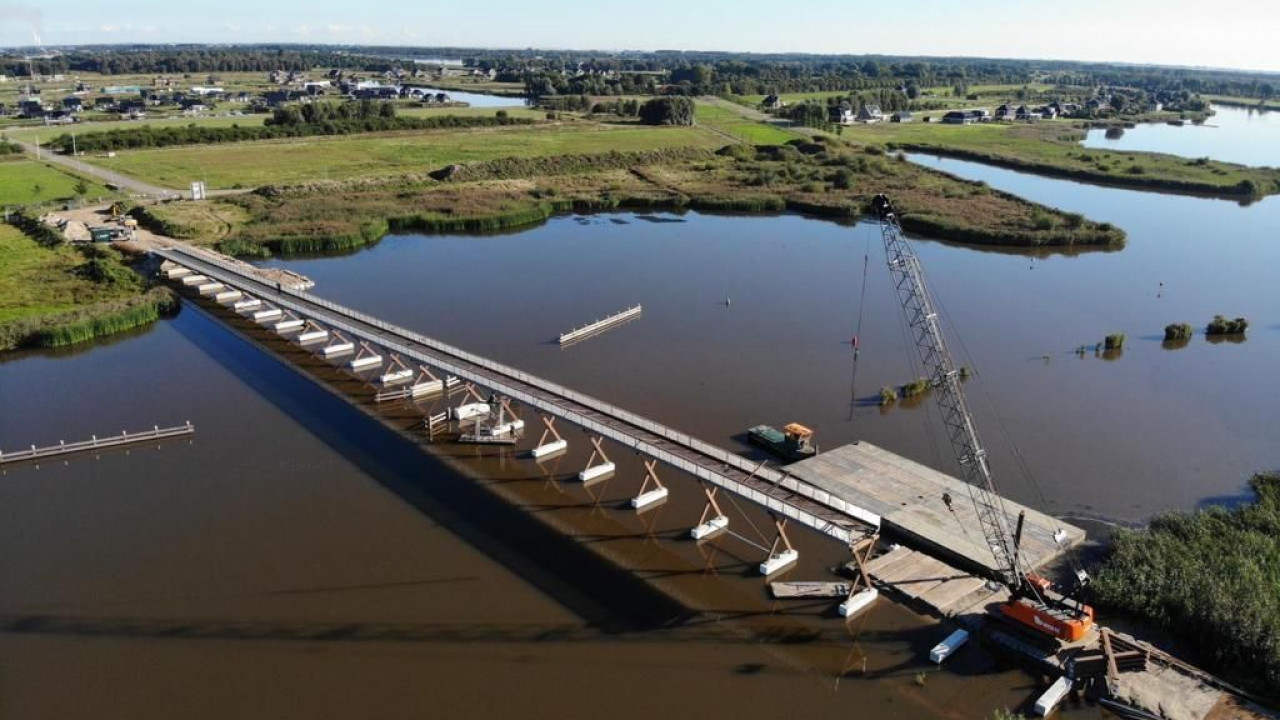 Construction of the bridge started early 2020 and it officially opens for cyclists and pedestrians – and, of course, bats –  in February 2021.